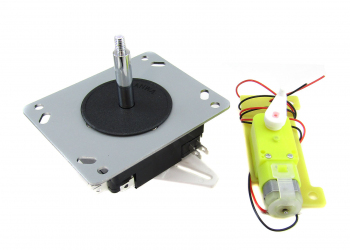 Ultimarc's ServoStik has a motor-driven restrictor plate that switches between 4 and 8 way in less than a second! The the Ultimarc Servo Control Board is required to control the switching, which can control up to 2 ServoStiks. This item is just the joystick with dust washer as shown, no top is included.

Note: We only sell the 9mm diameter shaft and include an M10-1.5 to M6-1.0 thread adapter with Sanwa Bat Tops. We do not stock the 12mm diameter joystick that Ultimarc uses for their bat tops. Addons: Installation: JoyTray Program:

This application can be downloaded here. It supports both the ServoStik and our Ultrastik 360

JoyTray Hotkeys:
When resident: F4 switches to 4-way and F8 switches to 8-way. You could assign I-PAC-connected controls to these keycodes. Maybe use I-PAC shifted codes.

JoyTray GUI Mode:
Launch JoyTray.exe by itself and it will show an icon in the tray which can be right-clicked to show a menu. It will gray out the U360 or ServoStik menu items based on whether you have them attached. There is an option to run the program at startup.

This special mode is used when there is no PC and you need to switch the stick using a toggle switch or two buttons.

The control board can be placed into hardware mode using the test application (see above). Note this change is PERMANENT.
Switching between 4 and 8 way is done using either two buttons or a toggle switch.

To connect the buttons, cut the A plug from the USB cable and strip the wires:
Alternatively you can use a toggle switch with the center connection to ground and the end connections to the green and white wires.

Control Board Return Policy: Since switching this board from PC mode to Hardware mode is a PERMANENT change, the control board can not be returned for a refund after you have made the switch. We can only resell the board if it is still in PC mode when it is returned.

Well made product 12/28/2022
By William Meier
The ServoStik makes switching between 4-way and 8-way games very easy. Not great for two-way joystick games like Battlezone and Galaga.