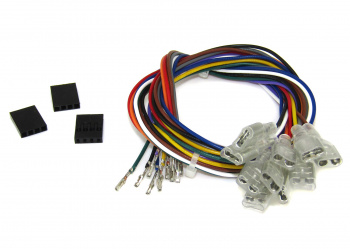 This harness is also known as the "9 LED single-color connection pack for I-PAC Ultimate I/O Interface" when bundled with the 4-pin connectors that we have included.

Since both boards use the - terminals to control the LEDs, you can use our LED Button Wiring Harness (.250in/6.3mm) to daisy-chain power to the LEDs. Just cut off the connector and use it to chain the + terminals of the LEDs together to the + terminal on the PacLED64 or Ultimate board.