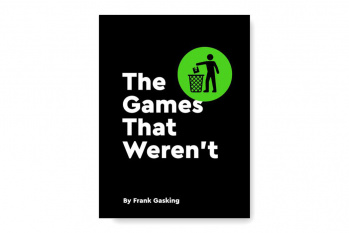 The Games That Weren't

The Games That Weren't

Now larger than both the movie and music industries combined, the video game industry has provided more than 40 glorious years of interactive entertainment across a plethora of hardware platforms, including consoles, computers and handheld devices. We truly are spoilt for choice when it comes to picking something to play, and that dizzying array is growing by the day.

Even so, there are a great many video games that have sadly never seen the light of day, for a variety of reasons, and many of these have incredible unsolved mysteries or gripping untold tales attached to them. The Games That Weren't aims to give these unknown titles a chance to shine by lifting the lid on their stories  even if we weren't able to actually play them as their developers intended.

Providing illustrated snapshots of unreleased games dating from 1975 to 2015, The Games That Weren't is Bitmap Books biggest and most ambitious book to date. It includes a wide range of titles from the Atari 2600 right up to the Sony PlayStation 4, by way of arcade, home computer, console, handheld and mobile platforms. Years in the making, it's packed to bursting point with exclusive content, in-depth interviews and much more besides.

Many of these lost classics are expanded upon in detail, as we share the untold stories and recollections of those involved with their design and development, as well as shedding some light on intriguing mysteries along the way. Assets and screenshots  some of which have never been seen before  help illustrate the narratives, and in the case of games for which no images exist, there are specially-created artist's impressions that give a tantalising visual interpretation of what could have been.

Covering more than 80 games  including Star Fox 2, Green Lantern and SimMars  across a 40-year span, and packed with content such as five specially-created 'Hardware That Wasn't' blueprint pieces and interviews with industry legends such as David Crane, Jeff Minter, Matthew Smith, Dan Malone, Eugene Jarvis, Dylan Cuthbert, Andrew and Philip Oliver, Geoff Crammond, Scott Adams, Jon Hare and many more, The Games That Weren't showcases and pays tribute to well-known and not-so-well-known unreleased titles, as well as games you might never have heard of  until now. As if that wasn't enough, the book has been produced to the signature high standard Bitmap Books readers have come to expect, with eye-catching fluorescent colours and high-quality binding on superb paper stock, and it comes with a free digital copy, so you can take it with you everywhere.

While the games industry has much to celebrate in the games that did make it onto shelves, there's something uniquely captivating in looking at titles that never achieved the finish line. We hope that The Games That Weren't will keep the memory of these failed masterpieces alive.

The Games That Weren't Reviews

The Games That Weren't Related Items: