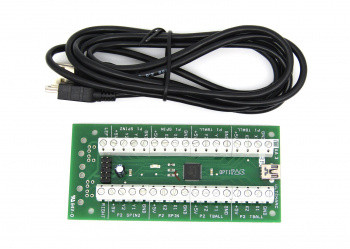 The Opti-PAC (Optical Interface for Pc to Arcade Controls) is an interface for easily connecting optical-type arcade control devices including trackballs and spinners to a PC for use with emulators such as MAME.
Features: Optical Controls Technical Info:
A one-axis optical control such as a spinner has one LED which shines across a spoked wheel onto two sensors. The two sensor outputs are compared with each other to generate movement direction. Therefore the interface requires two parts:
The OPTI-PAC has voltage outputs for the LED and the 2 inputs for the two sensors. It takes all voltage needed from the USB port.

A dual-axis device such as a trackball has all the above multiplied by two. Two LEDs, two pairs of sensors. So the board has two independent circuits for the X and Y directions. These two circuits can either be used on the same dual-axis device or separate single-axis spinners.

What controls can I use?
The Opti-Pac Plus supports all controls which use an optical wheel sensor system. This includes trackballs, spinners and rotary joysticks of all makes. It supports buffered types which include Happ devices, unbuffered (Suzo), high or low polarity. Don't worry if you don't know what these terms mean, there are easy wiring instructions for the various types of controls.

Do I need a power supply?
No. Power comes from the USB port.

What does the labeling on the input connections mean?
The input connections are labelled Player 1 Trackball, Player 1 Rotary and Player 2 Trackball, Player 2 Rotary. There is no difference in functionality between a Trackball input and a Rotary input. The different terms are used only for convenience. Each of these four inputs has two axes. This means each of these four can handle one trackball or two spinners or two rotary joysticks. There are also power connections. Multiple power connections are provided for ease of wiring, they are actually commoned on the board.